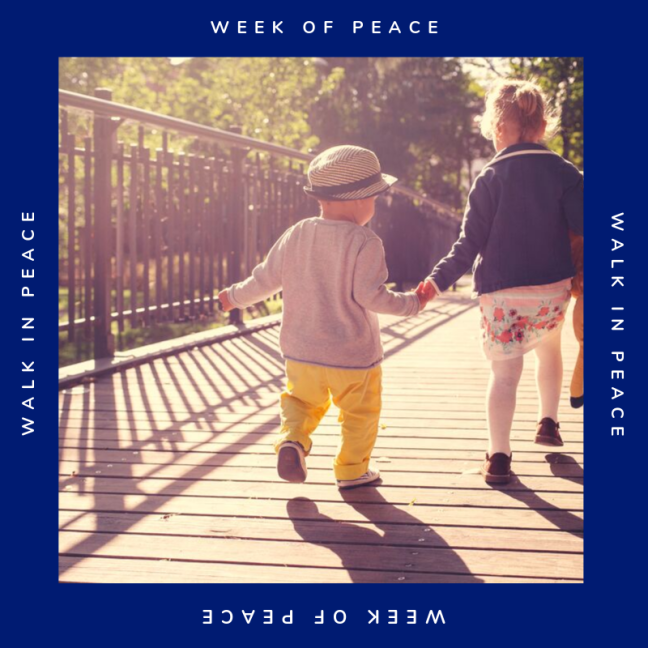 This morning I was walking to a school, and a man who was clearly trying to get a child in school in time, was encouraging her to pick up her feet and come along, the child was not particularly in the best of moods and I could tell at some point one of them would snap.

As I walked on into town, I checked the time! Great I thought – I’ve got enough time to nip into a coffee shop. A little moment of peace before I need to start work.

Coffee bought, I continued towwards the school, as I neared the school, there was a couple having a rather loud and ‘colourfully worded’ argument. Several mothers were trying to quickly move their primary aged children on so as not to hear the choice wording.

and I thought to myself, this has not been a particularly peaceful morning so far

As I turned to the road that the school is on, I saw a young couple. He was holding her hand in one hand and her bag in another. As I walked behind them I thought of how that was an image of the peace that I walk to school with. Jesus holding my hand in one hand, and my ‘bag’ in the other. The boy handed the bag back to her as they entered the school gates and I thought again “Jesus, you give me what I need when I need it”

As I entered the school, just after the first bell had rung (its ok I wasn’t late!!) reception was full of the usual first thing hustle & bustle. I waited my turn.

As I waited I thought again about all the images of peace or lack of peace that had already flooded my day (there are more – these were only a few) and how we have the privilege of bringing peace into the schools we are part of.

As I type this, I have receiveed a message from Katy saying this week she has spoken on fear as her Collective Worship topic! Seems God is onto something with us this week.

Week two: the week of peace!

This site uses Akismet to reduce spam. Learn how your comment data is processed.